Memories are made of this The busyness business

October 25, 2018 By Mairi Damer With Comments are off for this post Tagged with: bravado, bravery, confidence, Scotland, self-belief, self-confidence, showing off

Half a century, give or take. Fifty years of zigging and zagging through life trying to find the switch which flicks the bravery button on, permanently.

Shame it’s taken me so very long to feel solid and sorted, but from where I’m sitting on a tiny wee lump of rock clinging to the outer fringes of Europe, that’s par for the course. Because this is Scotland, and that’s what we’re like. We’re just not genetically coded for confidence. Our socio-cultural norm is to tut at anyone who sticks their head above the parapet or who shouts “look at me!”. For a modern nation, we’re really rather under-developed when it comes to cojones.

Strange really that we lack a bit of collective self-belief, because as a tiny country, we punch well above our weight. Scots have been inventors, adventurers and innovators since the year dot. We’ve got centuries of history as hardy emigres and we’re known for our resilience and survival instincts. We’ve got bravado, in bucketloads, and we’re funny as hell, but truth told, we’re not very mature. Despite Pixar’s animated representation of our country’s flame-haired heroine, being brave is actually a bit of a struggle for my kin.

As a middle-aged Scotswoman who’s somehow (eventually, after much trial and error) bucked both upbringing and cultural expectations to feel A-OK, it’s a source of huge sadness that in the 21st century, I’m still something of a rare breed in this neck of the world. Shame, because surely there isn’t, or shouldn’t be, anything exceptional about being someone who is pretty confident about herself and her work? Why should it be anything other than utterly normal to stand tall and say, I’m alright? Unfortunately, the Scottish psyche, and our finely tuned disapproval of anything which could be construed as showing off, often puts paid to bravery at a very young age.

Yup, “showing off” is generally an absolute no-no. Having said that, quiet self-confidence seems to be gaining momentum, but progress is glacial, and anything more vocal is still treated to a certain Scottish sniffiness. And damn it, this stuff is pervasive, tenacious and deeply damaging to our very wellbeing. If I had a dollar, a yen, a Euro or a pound for every time someone (usually a Scotswoman) says “no way, I could never do that”, I’d be giving Warren Buffett a run for his money.

Maybe this anti-showing-off culture is an international truism, but somehow I doubt it. Other nations don’t seem to be riddled with this collective self-doubt. Admittedly, the other end of the cultural spectrum, where rampant ego-building and overweening self-importance seem to be standard practice, is an utter anathema to angry little countries like mine. But for the sake of nationhood (and better mental health) surely there’s got to be some kind of compromise with collective confidence? And please, pretty please, couldn’t we at least try to get better at this stuff while we’re still young?

That I didn’t get comfy in my own skin until well into my 40s is a source of regret, but at least I got there despite the seemingly immovable cultural barriers. If I had one bit of sage wisdom to pass on it would be, hurry up! Honestly, there’s no need to wait ’til your 50s to hit the bravery button.

Meantime, there’s nothing else for it, folks. It’s up to oldies like me to speak up and set an example for youthful bravehearts. Anyone else want to join my gang of silver show-offs? 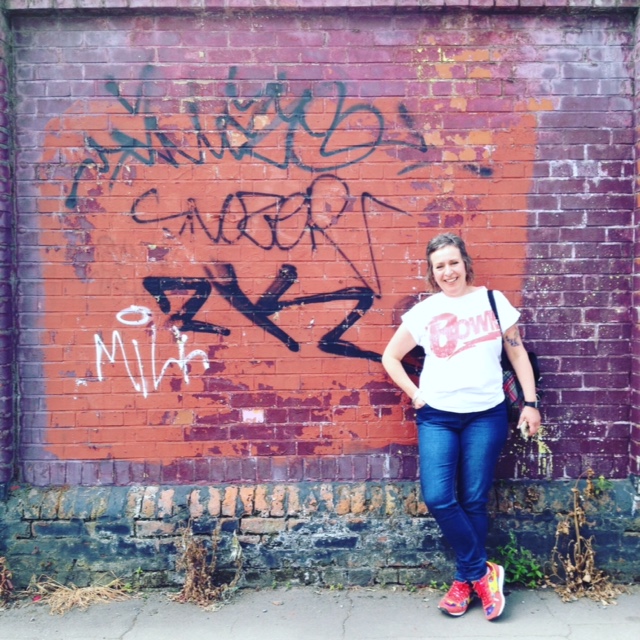 This piece was originally published in the first edition of Brave Your Day magazine, an independent, international quarterly publication, made right here in Scotland.