August 25, 2016 By Mairi Damer With Comments are off for this post Tagged with: business, clients, commerce, entrepreneurial, self employment, small business, sole trader, words 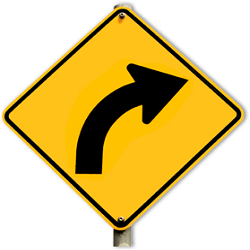 For me, there is no one direction. But for clarification, I’m not talking daft boys bands here. As if. I’m an old punk rocker, remember. I don’t do boy bands.

By this I don’t mean that I’m veering wildly from one entrepreneurial idea to another. Nope, the basic principle has stayed the same. I help people when they’re stuck for words. End of. What’s changing is who I pitch that help at.

Reviewing one’s goals and one’s preferred client group is probably A Good Thing. Changing tack, direction or ambition is par for the small business course, after all. I’ve realised, slowly, and through trial, error and numerous dead ends, that amending ambition and the subsequent direction of travel, is what it takes to succeed. And being successful, across a whole spectrum of measures, matters a great deal to this wee wrangler of words.

But still, this is scary stuff. Whether just altering course ever so slightly, or setting off in a whole new commercial direction, this is no small beer. Taking time out to look ahead instead of just ploughing on comes hand-in-hand with deep intakes of breath and the intense pressure of “bloody hell, here we go, AGAIN…”. This is not, and never can be, autopilot stuff. Changing tack takes guts, and a firm hand on the tiller. These are the times when you really, really don’t want to lost in the small business sea.

And that’s because a change of direction doesn’t guarantee success, ‘course not. But sometimes, the right road just opens up in front of your eyes. That said, just because it’s stretching out in front of you doesn’t mean you have to put your foot to the floor. Who can be blamed for revving up for a while before roaring forward? Plotting a route’s not a bad idea, even if it is on the back of fag packet. After all, there might not be much money around while you take time off to do prep and research. That, and you’ll need to find energy for a redoubling of determination, focus and effort. Some true grit.

So yes, I’m moving in a slightly different direction from now on. The real toughie for me is that changing tack means having to say a firm NO from now on to people whose support was once my bread and butter. It feels a bit like betrayal, but I’ve simply got to leave you guys behind if I’m going to shift up a gear and move on. But I must, my internal green light says go go go.

And if I get a bit lost on the way, so what? I’ll get there in the end.