May 27, 2016 By Mairi Damer With Comments are off for this post Tagged with: business, business networking, chimpanzees, commerce, enterprise, entrepreneurial, networking, pack mentality, self employment, small business, wolves 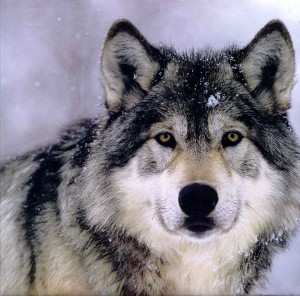 If safety, security and water cooler chat feature high on your career wishlist, then sorry old chum, but sole trading just ain’t a path you want to be wandering down.

Working as a lone wolf is exactly what is says on the tin. Not the wolf part – although I’ve met a few vulpine types prowling around the small biz landscape, on the hunt for profit, the weak and vulnerable – no, I mean the lone part.

Sole trading can be as lonely as hell. The buck not only stops with you, it begins with you too. You’ll need  raw determination and balls to be out there on your ownio. Sole trading requires a certain degree of single-mindedness, self-certainty and a fondness for spending time in your own company (and on your own company). It will almost certainly demand that you bring the curtain down on any shrinking violet tendencies you’ve previously been hiding behind – if you can’t bum up your own business, no-one else is going to do it for you.

When you’re on your lonesome, it’ll help if you actually quite like yourself. It’s good, maybe even essential, that you don’t beat yourself up badly when you make the inevitable commercial clangers. But equally, you’re on your tod when it comes to giving yourself a hard shake or a well-placed boot up the bahookie.

It’s not for the faint-hearted this lone wolf version of entrepreneurial adventure. It sure as hell ain’t for garrulous types who can’t stand their own company for more than a couple of hours. But sole traders aren’t necessarily introverted weirdo loners ploughing an economic furrow on the edges of enterprise. ’Course not, even lone wolves need a pack to run with some of the time.

There’s no lack of packs, as the overflowing small business networking calendar in this neck of the woods proves. But a pack is only as strong as the sum of its members, and frankly, some pack behaviour in the small biz community is just as dysfunctional as your average west coast of Scotland family. There’s alpha dogs, predators, runts and outcasts in all but a few.

The very best of these packs are groups and networks where there is no top dog, gatherings where all young pups and interlopers are welcomed into the fold. Those groups are a lot less about predatory pack mentality, preferring instead the social interaction, positive noise and helpful nit-picking of a cartload of chimpanzees. Suits me, I’m all for playing up the cheeky wee ape part of my personality for max monkey business…

Fellow members of these cheerful packs of primates are going to become your pals, your partners in crime, your shoulder to cry on and your chorus line. These are the folks you’ll turn to when the going gets tough and your sole trader arse is left hanging out to dry. These are the good guys and gals of the small business menagerie.

You might have to fight through packs of hyaenas to find ’em, and it takes time to work out which pack suits your own sole trading DNA, but it’s well worth the hunt. Once you’re accepted into the right gaggle, you’ll never look back.

And why would you want to? It’s lonely out there.